[This post was originally posted on the old blog on November 23, 2013, after a conference in Paris on September 7, 2013. A more detailed account of the methodology and results can be found in the PhD thesis defended (in French) in 2015, in section III.2.3]

As part of my thesis on narrative complexity in science fiction television series, I studied the reception of television series Fringe (Fox, 2008-2013). After five seasons, the series ended on January 18, 2013. 24 hours later, I started collecting users reactions on microblogging website Tumblr. This post is an attempt to explore the required methodology to analyse Tumblr’s endless flux : I was unable to find preexisting methodologies, as too few researchers seem to care about Tumblr. We’ll start with the technicals, then I’ll briefly analyze the results. Beware, this post contains  some spoilers on the series.

Fringe is a one of a kind science fiction series. Once seen as a mere copy of The X-Files (Fox, 1993-2002), it quickly found its own identity and unraveled a complex mythology structured around alternate realities, invaders from the future, and musings on what it means to be human. It tells the story of FBI agent Olivia Dunham (Anna Torv), solving strange cases with the help of scientist Walter Bishop (John Noble), and his son, Peter Bishop (Joshua Jackson). Fringe plays with classic themes of Bad Robot productions : mystery,  of course, but also the responsabilities of older generations ; its dense character network is then reminiscent of a dysfunctional family, similarly to  Alias (ABC, 2001-2006). 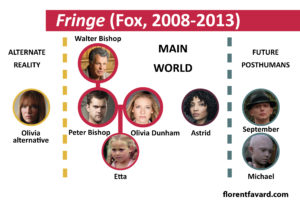 Tumblr is a microblogging website turned general quarters of numerous fandoms after LiveJournal’s decrease in popularity in 2007. It allows quick publishing on a personal blog, without complex settings or coding. Using it for more than two years now, I knew what to expect when starting this study of audience reactions ; for example, Tumblr is focused on pictures, videos and animated .gif. Contrary to fanfiction archives, focused on writing, Tumblr welcomes more visual fanart.

The ‘reblog’ button, similar to Twitter’s ‘retweet’, allows for a widespread circulation of posts, with each user able to add their own tags ou reaction to the original post. A reblog will then republish a post on your own Tumblr blog, while keeping track of all users’ comments, reblog, ‘likes’. It then becomes possible to follow the path of a very popular post.

Since I already own a Tumblr account, allowing me to create multiple blogs, I created a blog specifically for this study, titled anomalyxb-6473876.tumblr.com. I played with one of the series episode title,  Anomaly XB-6783746 (S05E10). I did not use a more ‘academic’ title since Tumblr is home to many fandoms, colorful users (predominantly young if we are to believe Quantcast) and private jokes and memes such as SuperWhoLock.

Your Tumblr blog title and url say a lot about your hobbies, your sense of humor or your knowledge of a specific fictional world. During the study, I stumbled upon blog url such as  mypatronusisrorypond (Harry Potter, Doctor Who), thewatcherscouncil7 (Buffy the vampire slayer) or dontblinkmywaywardddetective (Doctor Who, Supernatural, Sherlock), within the first sixty results. Those url invite others to guess what they’re refering to. So, let’s play !

I clearly presented myself as an academic and an acafan. It seemed to be more honest.  I received a dozen messages in the ‘ask’ section of the blog ; usually, users that I had reblogged, curious about the study.

The last two episodes of the series aired January 18, at 8:00 PM (New York). First, I watched the episodes ; then, on January 19, 24 hours after their broadcast, I searched for the keyword ‘fringe’. It seemed the most fruitful keyword for a search, compared to more focused ones like ‘olivia’, or the hashtags #KeepLookingUp and #WeCrossedTheLine advertized by Fox.

Back then, in January 2013, the Tumblr interface sent back results sorted ante-chronologically, from the most recent post to the older ones (today, it seems to be a bit more complicated…).  I then started reblogging every post, starting with the most recent posted 24 hours after the series finale, and going backward, up until a post right before the episodes started. I chose to end the reblogging with a few posts in which users commented that the episodes would air ‘in less than a minute’.

It was a painful task, since Tumblr is not built for such massive reblogging in an academic context. The posts do not have a timestamp by default. I had to read all the post to try and guess when they were published… Another problem was the reblogging limit : no more than 300 post reblogged daily. As I had to go through 4191 posts, I did not close my browser… I spent two weeks reblogging all the posts until I finally reached the ones right before the episodes broadcast. And it was back then, when the search was separated in many pages, each containing no more than ten posts ; today, with the infinite scroll, I guess my browser would have crashed… I encountered the same problem when I reblogged, during three days, three hours of reactions following the 50th anniversary episode of Doctor Who (BBC, 2005- ?).

Once all the posts where reblogged, I went to the ‘posts’ section of my Tumblr and started editing their tags : the last post reblogged (the one right before the broadcast) appeared first. I gave it the number 1, and then started my way up to the first post reblogged, number 4191…

Then I had to create a typology for the posts, categorizing them following different criterias. I opened an Excel workbook containing five sheets, and once again scrolled through my 4191 reblogged posts and started ticking boxes. Here is how I organized the sheets :

The posts are analyzed with a formal, semiotic point of view : langage used, type of post (is there text, a picture, a video, audio file, … ?) and intent behind the post. For this last column, I created mutually exclusive categories : liveblogging (commenting the broadcast live), fanarts (appearing as soon as one hour after the end of the broadcast), etc. Some posts where difficult to pinpoint, but the vast majority was clear-cut.

What are the fanarts composed of ? Screencaps, drawings ? Is the promotional material from Fox used by the fans ? I also took note of any reference to the Fringe fandom, to Tumblr, or even mention of close relatives watching the episodes with the user.

These sheets where focusing on my PhD research : I was analyzing characters and events references, as well as the narrative tension rising from each scene.

Even with two readings of all 4191 posts prior to categorizing them (one when reblogging, one when numbering them), I still stumbled upon posts that pushed me to modify my categories, forcing me to go back and revise my work. The entire categorizing took me about two months.

Despite Tumblr limits, precious data can be extracted once part of this endless flux is archived on a dedicated blog. For example, I tried locating in time as mush posts as I could, by visiting the users’ blogs (some blogs indicate timestamps, depending of the user’s choices). I had to search for a probable location at the time of posting (users sometimes indicate where they are when watching/posting, or their blog indicates a general location) in order to guess in which time zone the post was created. The results ? On 4191 posts, more than half of them were posted in the three hours following the start of the broadcast (that is, two hours worth of episodes plus the next hour), indicating that liveblogging took up the better part of the total 24 hours of posts. 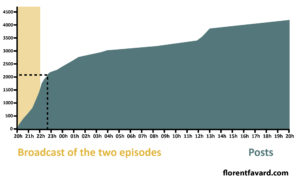 3822 posts contained text (98,4% of them in English) ; 699 posts contained at least one ‘still’ image (.jpeg or .png for example); 689, at least one animated image (.gif). It is kind of atypical for such a visual-focused website such as Tumblr, but the liveblogging may explain it, with its susually short, text-based posts, taking up to 1486 posts. 736 posts dealt with post-broadcast reactions of shock, sadness and excitation, without specific and articulated critics or hommages. 41 posts gave advice on illegal methods to watch the episodes. 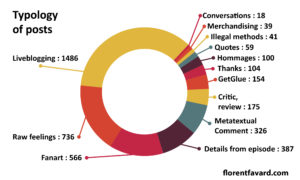 Beyond pure numbers, interesting things can be extracted. For example, only 89 posts made reference to an author figure, with Abrams, producer and founder of Bad Robot as well a co-creator of the series, still one of the main perceived authorial figure, even at a time when he was no longer directly involved in the writing process.

During a talk dealing with this study, I mainly focused on the visual aspect of the sample. Tumblr allows users to create ‘photosets’ by uploading multiple images. Many users then recreate key aspects of a scene. 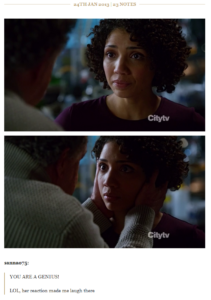 Scenes can also be reconstructed through the use of animated .gif, such as this one dealing with the long-awaited meeting between the two Olivias.  Some fans create parallels between multiple scenes, sometimes on the scale of the entire series. For example, numerous users noted how the portal used by Walter and Michael in the series finale echoed the one used by Walter and another child (Peter), in season 2. 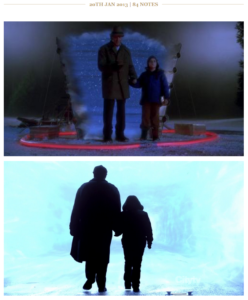 More complex fanarts took a bit more work, such as this one below, where colored filters and text were used. The users can even be seen exchanging advice on how to create fanarts using Photoshop. 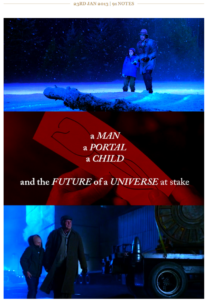 Fanart is not the only way for users to express those analogies and echoes to the past. As soon as the end of the broadcast, many users published quick posts isolating the perceived “main themes” of the series. 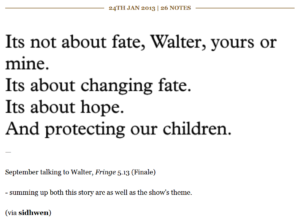 Tumblr users tipically use images, with .gif as their weapon of choice, to express their feelings, or “feels”. In the sample, these images may be extracted from other works, such as this one, or from the series itself. One .gif from Fringe was very popular of these 24 hours : this one. It shows Olivia crying, and may express sadness. But if you are familiar with the series, the meaning may change. This shot is from a scene in which, after losing a colleague and friend, Olivia receives a strange advice from the mysterious Sam Weiss : gather business cards during her cases, select random letters in them, and try to create a sentence. For fans, this .gif does mean only sadness, but grief and accepting to move on, along with the sentence that Olivia writes : “You’re gonna be fine”. It is important as many fans typically use words and expressions associated with grief in the sample.

Finally, it is interesting to see how Fringe created a symbol : the white tulip. A symbol of redemption and hope, it appears in season 2 episode “White Tulip”, which writers J. H. Wyman and Jeff Pinkner call a “mythalone”, a blend between episodic and serialized modes of narration. The case-of-the-week of “White Tulip” did not impact the series’ plot, but its symbol of hope affected Walter’s biography. Appearing in subsequent episodes, the white tulip became a symbol for the fans themselves, as they fought to keep the series on the air. It was used, for example, during Comic Con 2012.

It is, then, no wonder that the white tulip appears in no less than 219 posts, some users creating gifsets to underline the echoes between White Tulip (S02E18) and An Enemy of Fate (S05E13).

These few examples are only the tip of the iceberg. Even as they quickly react, fans can underline complex echoes in the series long-term storytelling : they make sense of it all. Today, I am not finished to go through those 4191 posts again and again. I am most interested in the way the finale helps fans make sense of the whole series, but many other things may be extracted from this sample. The Tumblr blog is thus still available to everyone who wishes to work on it.